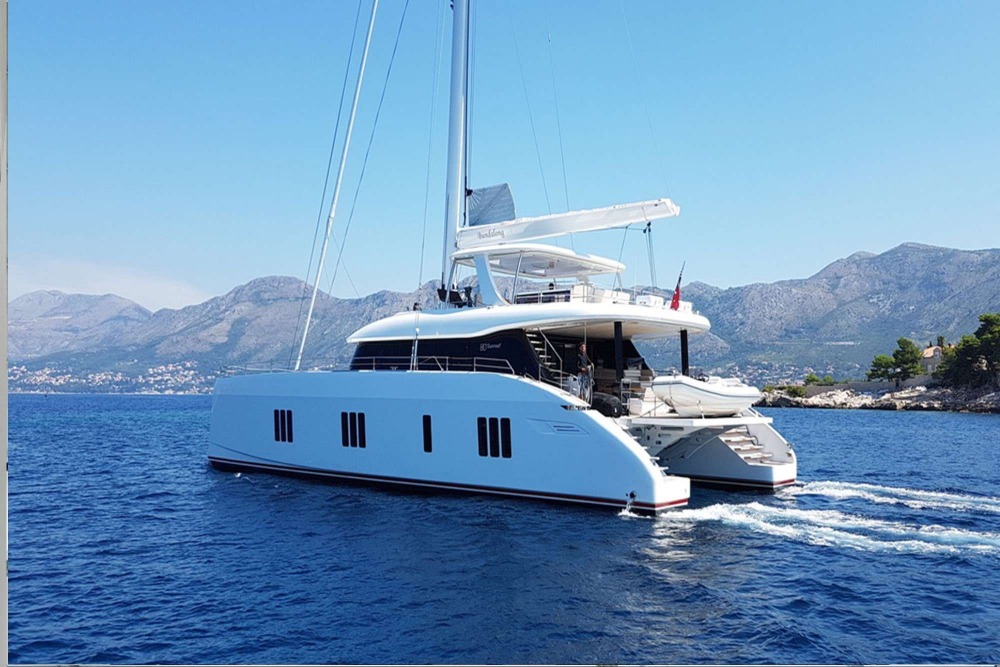 From $82,000 (2 passengers 7 nights)
To $90,000 (10 passengers 7 nights)*
*Price range is subject to change. Please Contact Us for pricing for various party sizes, number of nights and the premium weeks of Christmas & New Years. Best price guarantee: We endeavor to offer the lowest prices available and will always match lowest rates. We accept Visa, MasterCard and AMEX, no fees.

Like many Sunreef yachts, Bundalong features a complete in-house design from the Polish shipyard. Boasting five deluxe ensuite guest cabins, Bundalong has the space to host up to 10 guests on board in style. Guests can choose among two VIP cabins, two doubles, and one twin/convertible cabin. Bundalong is designed with an upscale "Hamptons" style beach house feel that is both inviting and luxurious. All cabins have large living spaces and high-end finishes with large in-hull windows. The custom interior accommodation areas are finished in a plush but homely feel and is very light and bright.

The main saloon is open with full-height surround windows and high ceilings, complete with comfortable sofas for cooling off in the air conditioning. Forward in the saloon is the galley and bar where you can prepare food and enjoy tea or coffee service while taking in the oncoming view.

Outside, the aft of the yacht features a breathtaking al fresco dining area and a bar overlooking the tender lift which can act as a swimming island once the tender is launched. The very private foredeck lounge and coffee table entertaining area is the perfect place for a sun-downer, especially if stern-to in a marina or even when underway under sail! Enjoy the entertainment facilities on the flybridge, including a wet bar, barbecue, and dining table. The entire space has a composite hardtop for weather protection with comfortable lighting.

Bundalong is setup with blue water sailing in mind and has everything you need to visit the far corners of the world without sacrificing comfort. Bundalong is derived from an Aboriginal word that means "join together" and that is just the experience you will have on board!

Brad started his sailing career when he was 10 years old. He didn't realize that it was going to be a way of life at that age but has made his way around the world sailing and working on various type of sailboats, ships, yachts. Growing up racing sailboats on a national level, he quickly moved up the leader board. Racing on the Varsity Team at Texas A&M at Galveston, he secured a Sloop National Championship, and was a podium finisher at numerous National Events. Outside of college sailing, he has been involved in multiple JBoat World Championship campaigns, Olympic class Regattas and qualifiers (Laser Class), many National Championship's (dinghy's and keelboats), offshore big boat racing (including a Traspac), and still loves to take a sunfish out on a Sunday Afternoon.

After a taking sabbatical he attended the Merchant Marine Academy, obtaining a Merchant Mariners Officers License, where he began working on commercial ships. Having completed a few Pacific crossings on cargo vessels, he realized he belonged back on the sunnier side of the industry- sailing vessels and private yachts. Since then, he has worked on private yachts and sailboats, the latest ones being on AD ASTRA, a 55ft catamaran, where he ran surf charters off of the Pacific side of Nicaragua for two years ..read more

Safety culture is second nature to him and you will feel comfortable and confident as you cruise the islands with Brad, he is currently an active Navy Reserve Lt. Brad has also spent years teaching and coaching sailing, and loves to share his knowledge to all of his guests, so feel free to get some sailing lessons while you are onboard!

When not on a boat, you can find him Kitesurfing, Surfing, diving (PADI certified), fishing, and spearfishing. If you catch him on land, he loves to ride motorcycles, bicycles, and enjoys to stay healthy, active, being surrounded by good music, people, and dogs!

James hails from England and was raised in the Sussex countryside of the United Kingdom. He has been a Chef for over 17 years and has traveled and worked in many countries around the world, including high-end restaurants in the UK; private residences in Portugal, Spain, and London; ski chalets in the Alps; and of course on yachts all around the Caribbean, Mediterranean, United Kingdom, and even Dubai.

This broad range of experience has gained him a strong repertoire in many different types of cuisine and has garnered excellent feedback from happy guests all around the globe including A-list celebrities, royalty, and international athletes. Although he enjoys every style of cooking, his favorites include haut cuisine and desserts. He brings his experience to Bundalong after perfecting his craft on other superyachts. His meticulous attention to detail and creative dishes are sure to impress even the most discerning charter guest who will be sure to enjoy his quick wit and artistic flair for the finer things in life.

When James isn’t busy in the kitchen, he enjoys snowboarding, kitesurfing, skateboarding, keeping fit, and trying different foods from around the world. James and Alexandra work seamless together and make an unbeatable team focused on providing premium service to guests onboard Bundalong.

Alexandra comes to us from the mountains of Idaho, USA. She was raised in an adventurous family, traveling and living abroad from a young age.

Alexandra has visited over 40 countries in her lifetime and spent several years of her childhood living on a sailing catamaran in Spain with her 3 sisters and parents. This is where she originally fell in love with the sea, developed a passion for sailing, and learned to speak Spanish. After years working and studying on land, she returned to yachting and the sea to keep traveling the world.

Having spent the past 4 years working on superyachts and sail boats, she certainly knows what excellences looks like and she brings her expertise to Bundalong elevating the experience for guests onboard. Alexandra has a welcoming personality with a splash of charm and good humor, and always strives to deliver exceptional hospitality to guests. She has a fine eye for detail, and ensures that those around her are well taken care of, with smiles on their faces and glasses never empty. She enjoys showing off her creativity in the form of decorative tablescapes, delicious cocktails, and thoughtful treats.

Alexandra has a passion for life and enjoys a variety of activities in her spare time, including professional photography, snowboarding, yoga & fitness, rock climbing, scuba diving, and any other water/adventure sports she can get her hands on. She also comes from a musical background, and if given the opportunity, she might even entertain you and your guests with her beautiful singing and guitar on a calm night under the stars.

James hails from Indiana where he discovered his fascination for engineering during his teenage years helping local mechanics annual the engines on airplanes at a rural airport. James developed his talents over the following years and has applied his skills in the yachting industry both in the engine room and at the helm. In addition to obtaining yacht maintenance and engineering certification, James has also earned his 100 gross ton captains license.

James combines his mid-western charm with solid know how to keep Bundalong and all her toys in top shape so guest can maximize their enjoyment while onboard. Whether you want to try your luck at skiing or wakeboarding, take the sea bobs out for a cruise, or just relax on the back of Bundalong with the tender lift in "sunset mode", James will be there to ensure everything is set up and ready to go.

James owned his own cutter sailing vessel in the past so he always enjoys being at sea and under sail. When not on the water he enjoys a good game of volleyball or the chance to saddle up on two wheels and take a motorcycle ride through the countryside. James is a favorite among gusts and will always be there with a quick joke and a friendly smile to make your day.

Contact us for rates and current availability or to book a charter aboard Bundalong! 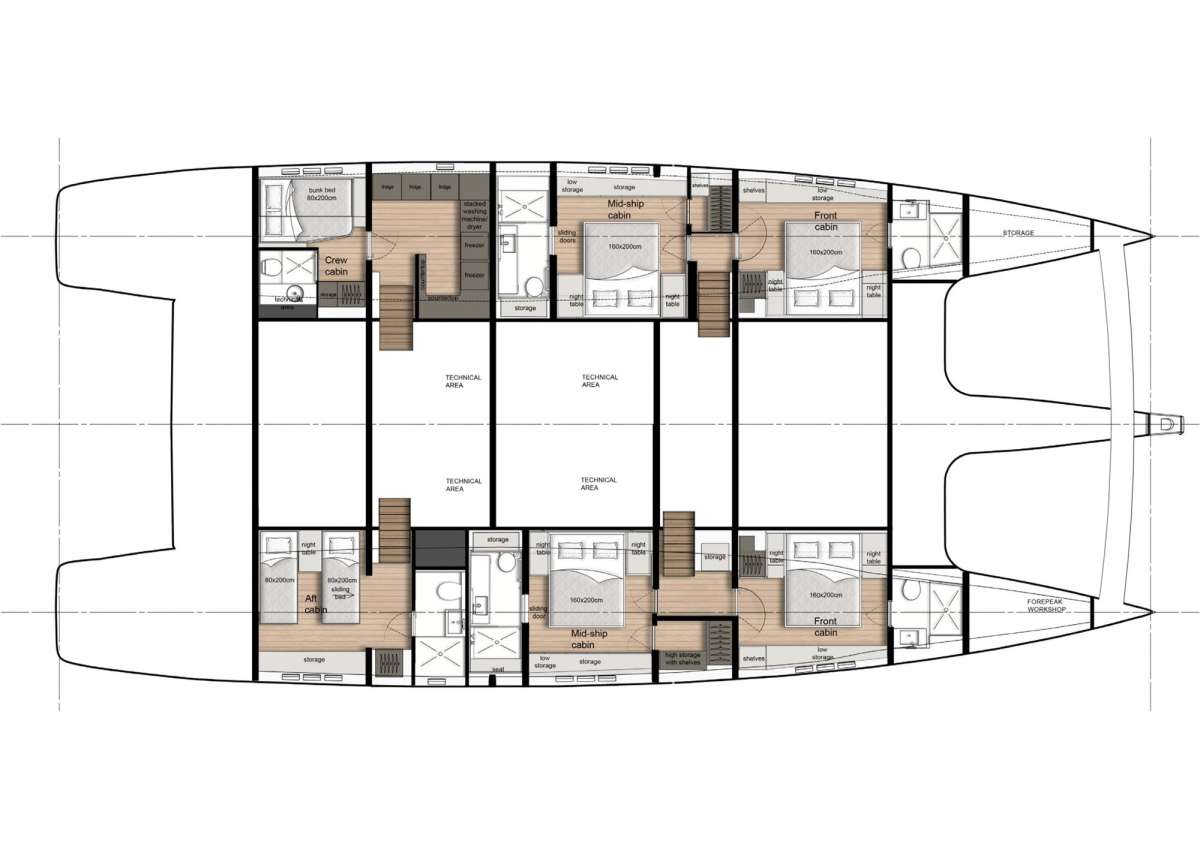 Disclaimer: While we make every effort to ensure that the information for Bundalong is current, we cannot guarantee that the details listed are 100% up to date. Please contact us and we will happily verify any details for you. Your privacy is important to us, view our Privacy Policy