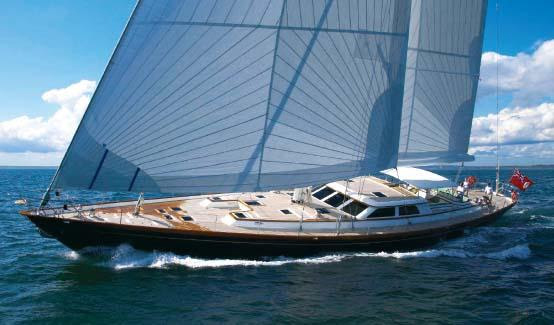 From $65,000 (2 passengers 7 nights)
To $70,000 (6 passengers 7 nights)*
*Price range is subject to change. Please Contact Us for pricing for various party sizes, number of nights and the premium weeks of Christmas & New Years. Best price guarantee: We endeavor to offer the lowest prices available and will always match lowest rates. We accept Visa, MasterCard and AMEX, no fees.

Welcome Aboard S/Y Whisper: Winner of ShowBoats Awards' 2004, "Best Sailing Yacht Under 40 meters." It's what luxury sailing yachts and luxury yacht charters were meant to be. Launched in May 2003 at Holland Jachtbouw yard in Amsterdam, Whisper is available for the most discerning of clients who seek luxury yacht charters and corporate yacht charters in the Caribbean, Bahamas and New England.

Simon has been sailing professionally since 1988. Prior to this he trained as a boat builder in South Hampton. Super yachting has taken him all over the world, from Alaska to Cape Town, & the Pacific. He particularly enjoyed the Classic yacht racing, still embracing the old traditions of the sea onboard today’s modern yachts. He’s a friendly, outgoing person who enjoys cycling and a fit active lifestyle.

Chef Louise has been cooking within the Superyacht industry for around twenty years, on a variety of motor and sailing yachts cruising around the world. The majority of the boats have been Mediterranean based, so his cooking style reflects this, with strong accents on fresh, healthy ingredients, sourced locally where possible, intermingled with homemade delicious desserts, pastries and breads. Whilst between boats, Louis did a three-month stage at a Michelin starred restaurant in Winchester, UK, called the Back Rat. The style of food was fresh locally sourced ingredients for British cuisine, with a modern twist. With a friendly easy-going nature, Louise is passionate about good food, cooking what people love to eat and introducing them to new cuisines and flavors that reflect where the boat is cruising. Louise was born in the South of England, where she grew up not far from London. With regular visits to Europe for holidays from a young age, her love for food was definitely inspired from all the lovely markets and restaurants she ate in and visited. In her spare time, she loves to explore new places, keep fit, and read. Louise also loves live music and theatre...read more

Kayt grew up between Shanghai and the west coast of Scotland. Sailing was a mainstay of early childhood! She has been in the industry for six years on boats as far-flung as Indonesia and Hong Kong. Before joining superyachts Kayt was a personal stylist. Tablescapes and cocktails are her creative outlet onboard; she aims to wow. Passionate about guest care and service Kayt will make charters memorable. In her free time Kayt enjoys yoga, hiking and visiting galleries.

Growing up in and around the South Coast of the UK, Alex has sailed for over 20 years, her passion for sailing has led to skippering and racing around the world, including iconic races such as the Caribbean 600 and the Sydney to Hobart. Alex has a passion for exploring off the beaten track and has sailed up to the Arctic, Mediterranean and also Europe, Alex enjoys being on boats of all shapes, sizes and types and loves all forms of water sport’s especially diving. Alex has a love of meeting new people and learning new skills, alongside boats Alex has a degree in Disaster Management and enjoys reading.

Born and raised in Connecticut, Will started sailing at age 8. Later racing at the national level before running the performance racer/cruiser Andrews 72 since 2006. Over the past 25 years he has cruised, raced and delivered various sailing and motor vessels ranging from 12m – 52m. He has sailed as far as the Eastern and Western Mediterranean and all through the Caribbean islands, as well as the French and Italian Riviera’s covering more than 75,000 miles. Prior to the yachting industry, he built one of the film and television industry’s largest post-production facilities. His life style choice as a captain/engineer has allowed him to develop his love for sailing, exploring, entertaining and meeting new people from all over the world. Will greatly looks forward to doing his part as the engineer and providing guests the best possible experience aboard Whisper.

Contact us for rates and current availability or to book a charter aboard Whisper! 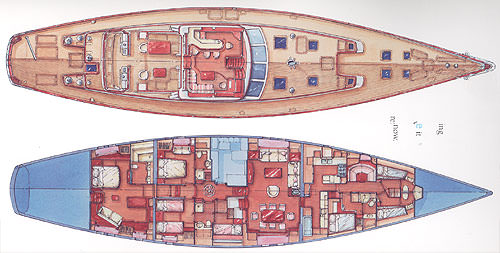 Disclaimer: While we make every effort to ensure that the information for Whisper is current, we cannot guarantee that the details listed are 100% up to date. Please contact us and we will happily verify any details for you. Your privacy is important to us, view our Privacy Policy