From $160,000 + expenses (2 passengers 7 nights)
To $170,000 + expenses (11 passengers 7 nights)*
*Price range is subject to change. Please Contact Us for pricing for various party sizes, number of nights and the premium weeks of Christmas & New Years. Best price guarantee: We endeavor to offer the lowest prices available and will always match lowest rates. We accept Visa, MasterCard and AMEX, no fees.

Reputable, well-known charter Captain, David Laird is at the helm with a fun, young, dynamic, active crew of 9.
Excellent interior volume and amazing deck spaces, including a fantastic beach club.
Full-beam master stateroom on the main deck featuring a king-size bed, lounge, dressing room and en-suite bathroom.
An extensive array of toys, including a custom water slide from the bridge deck. Ideal for water sports fanatics!

Why you should book Big Sky!

Reputable, well-known charter Captain, David Laird is at the helm with a fun, young, active crew of 9.

An extensive array of toys, including a custom water slide from the bridge deck. Ideal yacht for active families and water sports fanatics! 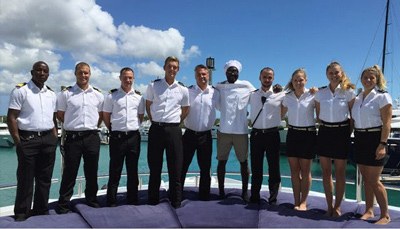 Ulf was born and raised in East Germany, before he moved to Munich where he studied Hotel/Catering Management and continued with Sport and Tourism Management. His love for the water started in his early years when he spent all summers at the German beaches, where he also got his first introduction in to sailing. After spending several years working in hotel and restaurant management his urge of exploring the seas led him to a maritime academy in England. He started delivering sail boats from anywhere in Europe until he got hired as a mate on his first Motor Yacht. Within one year he was offered his first position as captain and now has over 18 years experience within the maritime industry.

As the Captain, Ulf’s primary focus is to ensure the safety of the guests, crew and the vessel. His duties range from navigation to accounting, planning and managing charters to the overall management of the yacht and the crew. He encourages all departments to work as a team to ensure that each charter will be a rewarding experience. He is operating Big Sky” with the right balance between a formal and a casual ambiance which is desired by all guests...read more

Craig is from Knysna, a small coastal town on the SW coast of south Africa. He grew up on and in the water his hole childhood. Following in his father’s footsteps he sought a career in construction, but was lured away by a friend who w3s in the yachting industry. He got his first job aboard a yacht in Savannah GA, and he was hooked. Did his engineering courses all over the world and has never looked back. He spends his off time staying active with participating in various sports, building motorcycles, and renovating houses.

Chef Kennon is from Roanoke, settled in the beautiful Shenandoah Valley of the Appalachian Mountains. A good southern man at heart, Kennon enjoys hiking, camping, and walking the trails in Western Virginia. In his free time, he enjoys watching mixed martial arts (MMA)and American football. GO WASHINGTON! Kennon has been working in restaurants since the age of 15, which inspired him to attend the Al Pollard Institute of Culinary Arts. He enjoys cooking Southern American recipes and Italian. His favorite type of food is Asian and one day plans on traveling through SE Asia to learn as much as he can. Although Kennon might come off at first as quiet or reserved, please feel free to step into the galley and pay him a visit, he would be happy to put on a show. He loves stand-up comedy, especially Mark Normand.

Born and raised in the heart of Durban, South Africa. Shanlee began her career after graduating from High School, studying at the International Dermal Institute and completing her Diploma in International Massage and skin therapy. Shortly thereafter her dreams broadened and her curiosity for design had her compiling artwork for a World famous surf/skate clothing and footwear brand. Growing up on a beach she had a passion and desire to always be in the water. At the age of 24, Shanlee decided to set sail in Fort Lauderdale, Florida on her first Yacht. Finding herself drawn to the broad array of creativity, design and fine detail of setting up themed tables and parties for all occasions, she was in her element. Shanlee has chartered all across the world, completing seasons in the Mediterranean and Caribbean. Shanlee’s hobbies are working out, kick boxing and spending time exploring to new places.

Proudly from Northern California, Katelyn grew up in a rural area surrounded by lakes. Always playing outside with her two brothers, Katelyn quickly developed a great sense of humor and some thick skin. Before yachting, Katelyn attended nursing school. In her free time, Katelyn loves exploring new places and anything water related. You can find her listening to the Sword and Scale or Dave Ramsey podcasts throughout her workday. Katelyn has been in yachting for one year and plans to continue to work within the industry.

Jess was born and raised in Virginia and after a senior trip to Costa Rica she became hooked on international travel and getting out of her small home town. She graduated from Virginia Tech with a bachelor of liberal arts and soon after moved to Hawaii where her passion for the ocean and waterworks began. Jess spent 10 years working with autistic children, but her free time was consumed with free diving, sailing, and inter island travel. In order to expand her travels and experience she spent a year and a half living in Australia and exploring that corner of the world. On returning to Hawaii, she began working on a day charter boats and decided to make the move into yachting. She looks forward to using her passion for the ocean and international travel to create a unique ad memorable experience for her guests.

Charlie grew up in England on a farm in Oxfordshire, about as farm from the ocean as you can get. Although a love for the ocean was in his blood, it wasn’t until he went to Plymouth university that he really fell in love with the sea air. Shortly after his time in Plymouth he left for Indonesia in his early 20’s where he became a scuba diving instructor, a profession that led him all over the world and under its oceans.

About 10 yrs ago Charlie had an opportunity as a bosun/dive instructor on a 145ft motor yacht which he grabbed with both hands soon becoming the First Mate a role he stayed in for 6 yrs. During this time he gained qualifications and extensive cruising experience in the Bahamas, Caribbean and the North East of the US. He has hopes of becoming a Captain like his great uncle and passing his love for the water on to his new son. His hobbies include triathlon golf, motocross, tennis, diving, photography, traveling and most of all spending time with his family.

Kevin is from California, originating from the Bay Area. Kevin loves anything sports related. He grew up playing baseball, basketball, and soccer. He also loves anything outdoors including hiking and camping. Kevin is currently in the process of learning to speak Greek. His father is originally from Piraeus and Kevin hopes to one day be able to speak to him in his native tongue.

To join yachting was the best decision he has ever made. One of his favorite ways to explore a new country is to simply get lost.

Michael Hamilton Hoskins is 26 years young and was born in Durban, South Africa. He started yachting a year and a half ago but has spent alot of time out at sea previously, whether it be on his father's fishing vessel or on his grandparents sailing yacht. Michaels family were highly adventurous and he spent most of his childhood exploring and camping the wild bush of Southern Africa. Michaels grandparents were sailors and would often take him out on trips and this is where he gained his passion for the ocean. Michaels dream is to follow in his grandparents footsteps and own his very own sail boat and travel to the remote islands of the world. Michael enjoys the simple things in life like sitting around camp fires with good company, hiking mountains along the coast with gorgeous views and playing his guitar.

My name is Casey Shartin , I am 26 year old South African deckhand in the midst of never-ending passion for travelling the world. With this passion for exploring, I spend half my time maintaining boats, and the other half chasing my next adventure. I was born and raised in Durban, South Africa and I have a twin sister. I started yachting about 3 years ago and in this time have seen and met so many amazing places and people. When I am not cleaning decks, swimming, gyming or having a laugh with friends I hope to make your experience one to remember.

Contact us for rates and current availability or to book a charter aboard Big Sky!

Disclaimer: While we make every effort to ensure that the information for Big Sky is current, we cannot guarantee that the details listed are 100% up to date. Please contact us and we will happily verify any details for you. Your privacy is important to us, view our Privacy Policy