The Lionfish problems, and potential solutions, for the Caribbean Virgin Islands 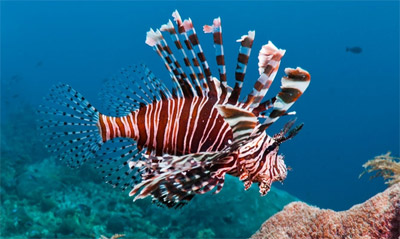 The Virgin Islands are being invaded by the non-native Indo Pacific Lionfish which is a small, beautiful but ferocious predator which was introduced to the area from being accidentally released into the Atlantic - it is believed they began spreading after a hurricane hit an aquarium in Florida, releasing some lionfish into the ocean - in 1995. Lionfish numbers have swelled and their journey in the area has established them throughout the Atlantic, the Caribbean and most recently the Gulf of Mexico.

Lionfish eat mostly juvenile fish populations, taking away the food source of other commercial species such as groupers and snappers but they are also omnivorous and consume the food of herbivores that are important to protect coral from algae growth. Lion fish themselves do not have a natural predator in the Caribbean, and a single female Lionfish can spawn 2 million eggs per year, so their growth is left unchecked.

In studies each lion fish eats between 30 to 40 fish per day. In some of the hardest hit areas there can be as many as 1,000 Lionfish per acre.

Several organizations in the BVIs have been created to help track and eradicate local lion fish, including Reef Guardians. Reef Guardians has set up voluntary responses in the BVI, providing training and use of markers for divers and tourists to mark the fish where they are sighted. The marking and removal of these fish is not actually all that difficult as they are very territorial and will say within feet of their territory until the food source runs out.

Some of the crewed charter yachts, especially the dive boats including catamaran Braveheart, are actively involved in siting and capturing lion fish. If your group is interested in taking part in the program while you’re on your vacation please let your crew know.

Lion fish is quite tasty however a newly published study by researchers at the University of the Virgin Islands finds that the Lionfish can contain the ciguatera toxin that causes fish poisoning, so make sure to get up to date information on the ciguatera situation before eating your catch.

> Back to all articles