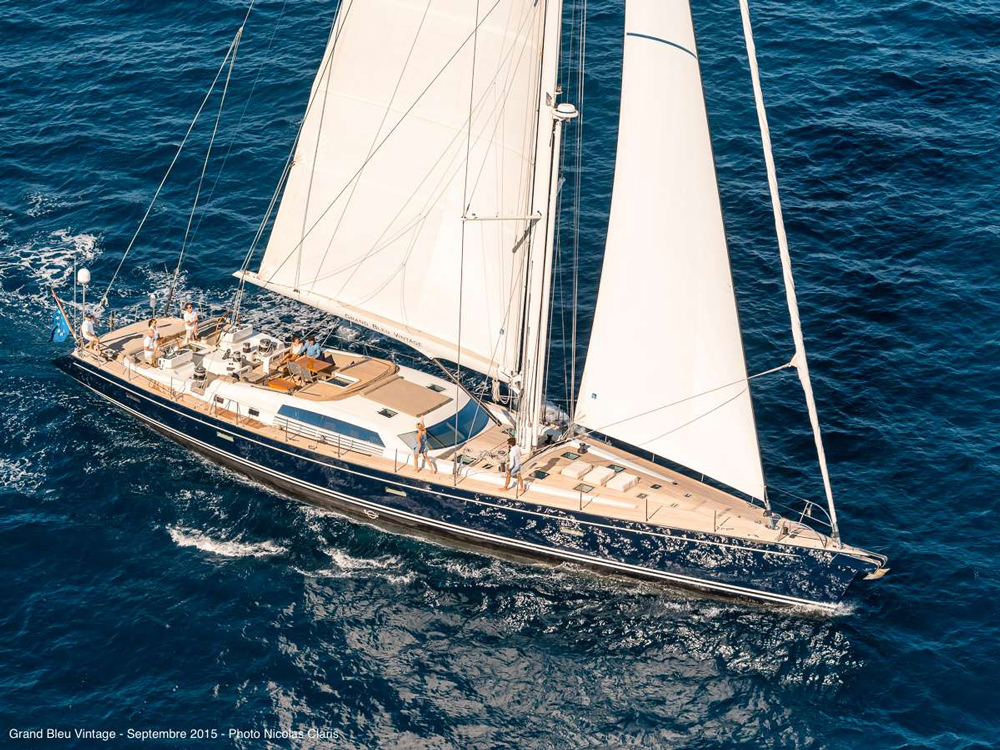 From $39,000 (2 passengers 7 nights)
To $43,000 (8 passengers 7 nights)*
*Price range is subject to change. Please Contact Us for pricing for various party sizes, number of nights and the premium weeks of Christmas & New Years. Best price guarantee: We endeavor to offer the lowest prices available and will always match lowest rates. We accept Visa, MasterCard and AMEX, no fees.

Grand Bleu Vintage is an exercise in elegance, comfort and impeccable hospitality. Designed by the renowned Philippe Briand and built by CNB Bordeaux, she exudes quality and performance in every situation. Whether under sail or at anchor guests will find Grand Bleu Vintage comfortable and luxurious. The deck salon offers guests the opportunity to relax and unwind in the warm breezes of the Mediterranean while sipping an aperitif before dinner or simply reading a great book. Guests have the choice to dine on deck or below in the light and airy salon. The crew of 4 members is gracious and dedicated to the enjoyment of their guests. Captain Pascal has been on board for 14 years. He has an incredible knowledge of the Mediterranean and can guide you to the best sailing and beautiful anchorages where you can enjoy a swim in crystal waters or star-gazing unimpeded by artificial light. Furthermore, in the team, there is a professional chef who takes great care in catering to guests preferences.

Pascal worked as a sport shop manager for three years before deciding to crew on sail boats such as the 80’ Umatalu, the 75’ Serenité and the Swan 651 See Flo. During his five years of training, he sailed in the Mediterranean, the West Indies, Brazil and took part in several Atlantic crossings. He is now perfectly at home in the charter world on board large sailing yachts.

He also monitored the building of a 75’ sail boat, ‘Kermor’ and stepped on board as Captain for a round the world cruise which took him to all the seas and oceans of the world between 1993 and 2002.

Since then, he has sailed on various boats, such as the Swan 72’ Elysion Blue, the 130’ Globana M, the motor yacht Pegasus, the 82’ Falcon, and Sirius of Man, a Predateur 100, before embarking on Grand Bleu Vintage in February 2007...read more

In addition to his excellent seamanship and technical skills, Pascal loves water skiing and downhill skiing, he plays golf and enjoys natural history, astronomy and photography.

Quiet and cheerful, Pascal is an attentive and welcoming host. His extensive experience allows him to deal confidently with any situation.

Guillaume comes from the French Riviera where he discovered his passion for the marine environment at a very young age.

He studied in different military establishments, which taught him discipline and determination.

Passionate about sliding sports, he has followed the waves from the East Coast to the West. During his travels, he extended his passion to fishing, underwater hunting, deep sea apnea diving and yachting.

Guillaume is recognized for his dedication to excellence and his eagerness to learn new techniques and get new skills. He has been part of Grand Bleu Vintage's crew since 2018.

Born in Provence, passionate by food since he discovered the cuisine of his grand mother, he went straight away to culinary school in Nice. During this period, he got the chance to work with Michelin-starred chefs as Georges Blanc and Édouard Loubet. Those chefs had a big influence on his cuisine .

At the age of 18 years old, he left the south of France to go to London where he met a new food culture.

After 2 years in London, he decided to get closer to the nature and worked for the 2-star chef Simon Rogan, owner of a farm and a gastronomic restaurant.

He is in its second summer season onboard Grand Bleu Vintage.

"With all the things that I learned in the restaurants I worked in, I wanted to propose and serve my own cuisine. That why I chose a beautiful sailing yacht to offer the best of my French cuisine with a British twist."

Contact us for rates and current availability or to book a charter aboard Grand Bleu Vintage!

Disclaimer: While we make every effort to ensure that the information for Grand Bleu Vintage is current, we cannot guarantee that the details listed are 100% up to date. Please contact us and we will happily verify any details for you. Your privacy is important to us, view our Privacy Policy