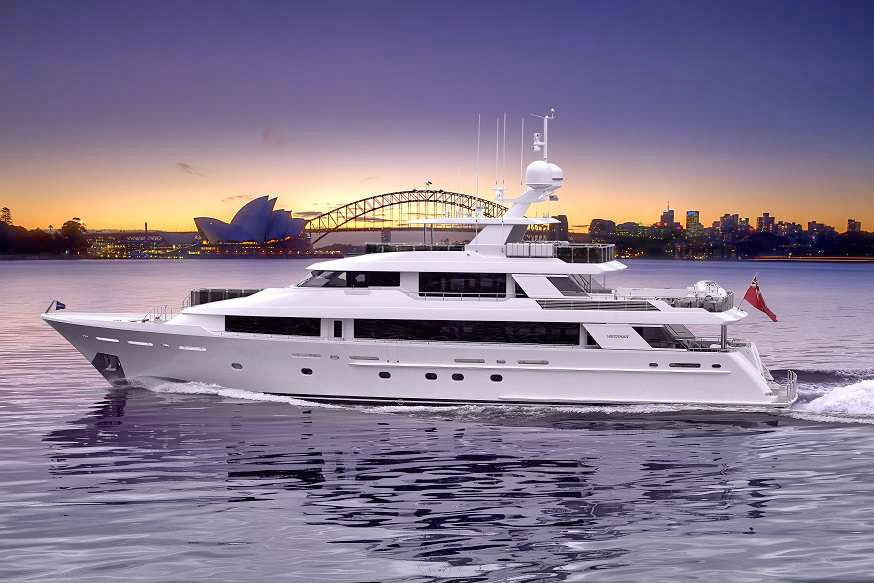 From $140,000 + expenses (2 passengers 7 nights)
To $140,000 + expenses (10 passengers 7 nights)*
*Price range is subject to change. Please Contact Us for pricing for various party sizes, number of nights and the premium weeks of Christmas & New Years. Best price guarantee: We endeavor to offer the lowest prices available and will always match lowest rates. We accept Visa, MasterCard and AMEX, no fees.

Pipe Dream has an impressive selection of activities and water sports available to keep guests entertained from sunrise to sunset.

Large Jacuzzi tub on sundeck along with a BBQ and outdoor wet bars.

Born in the Netherlands, Bart van der Horst grew up on the Connecticut shoreline with his two brothers and one sister. He started boating as a young child and never looked back. As a matter of fact, all of his hobbies revolved around the water, and he jokes that he hibernated during the cold months.

Captain Bart is a lifelong yachtie who has accomplished a lot in his career. His work has taken him along the entire US East Coast, the St. Lawrence Seaway and Great Lakes, Central America on both the Atlantic and Pacific coasts, the Mediterranean, the Red Sea, a portion of the Pacific Northwest, and Australia, and he counts both the Bahamas and the Caribbean as two of his favorite places...read more

His long career running private yachts led him to the world of charters and he joined the crew of PIPE DREAM in 2021. As a working captain, Bart believes in leading by example and has built a cohesive team. With the help of his crew, he is committed to giving guests the best possible charter experience so that they will return again and again.

Boating, stand-up paddleboarding, and beach trips are some of Bart's favorite leisure activities. In addition, he loves to travel, and his bucket list includes visiting every country in the world by land and sea.

Kyle Metzler was born in Toronto, Canada and grew up in South America and Europe. One of five children, he spent his formative high school years in Connecticut and Massachusetts. Having spent over thirty years on the water, he began boating professionally in 2004, and served as a sportfishing captain for fifteen years before switching to yachting.

Over the course of his career, he has worked in the waters along the entire US East Coast, the Caribbean, the Pacific coast of Panama and Costa Rica, Cocos Island, both the British and American Virgin Islands, Mexico, Canada and the Great Lakes. His favorite charter destinations to date include Bermuda, Harbor Island and the Exumas. A true professional with extensive experience, a sense of humor, and a positive attitude, he joined the PIPE DREAM crew in 2022.

No matter what each day brings, Kyle enjoys sharing his passion for yachting with charter guests, catering to their specific needs, and providing them with an unforgettable experience. If he is not at sea, he can be found reading, running, working out, or snowboarding in Lake Tahoe, and he is planning to retire to the mountains one day.

Gabrielle Coenen was born in Coral Springs, Florida and grew up in Medellin, Colombia where her family lived for 10 years. On the weekends, she and her sister would ride horses on the family's farm in the mountains. After moving back to Florida in 2000, she embraced beach life.

As a child, Gabbi was always interested in traveling, and once she discovered yachting, her path was set. She has worked in hospitality for 15 years, managing a large estate in Los Angeles and a holiday home in Malibu. As chief stewardess on PIPE DREAM, she is responsible for the yacht's interior and anticipating each guest's needs. Taking care of all the details is Gabbi's aim so guests can relax and enjoy the stunning scenery and delicious food.

Her travels have taken her to the Greek islands, the Caribbean, Singapore, and the south of France. She’s sailed the Great Lakes and crossed the Panama Canal more than 10 times. Her favorite place on Earth has to be the Bahamas with its beaches and crystal clear water.

Gabbi plans to continue her career in yachting and perhaps return to estate management later on. Gabbi enjoys pottery and hosting guests at her cottage in America's oldest city, St. Augustine, Florida, when not working on PIPE DREAM.

Kelly Tadlock was born and raised in Alabama, and played both baseball and basketball from his youth through college. A chef with a degree in culinary arts, he has worked in restaurants in Islamorada and Fort Lauderdale, Florida, until 2008 when his restaurant sold and a friend invited him to work in Newport for a month. Since then, he has worked 15 years as a chef on charter yachts and has never looked back.

Chef Kelly has completed three Atlantic crossings, worked charters in the Caribbean, Bahamas, and Mediterranean, and lists Alaska and Mallorca among his favorite destinations. He joined the crew of PIPE DREAM in 2021, bringing his experience in most cuisines and dietary requirements to each charter. He strives to keep guests talking about the dishes they ate long after their trip has ended, by preparing foods local to every itinerary.

Aside from cooking, Chef Kelly's greatest joy is raising his children with his wife of 20 years. When not at sea, he plays golf, teaches cooking classes, and runs Provisions Gourmet, his private events and catering company.

Brandon Ferguson was raised on a small farm in Humptulips, Washington, in the Pacific Northwest, where he played a variety of sports – including soccer – along with his two younger brothers. At a young age, he began boating on local lakes and rivers, eventually working on an Alaskan commercial fishing boat. In the off-season, Brandon worked in his family's lumber mill, and after obtaining his Associate's degree, he was an industrial mechanic and heavy equipment operator/mechanic until he got his first taste of the yachting industry in 2011.

With Alaska and the Bahamas as his top two favorite destinations, his yachting career has taken him to Turks and Caicos, US Virgin Islands, British Virgin Islands, the Caribbean, Colombia, Panama, Mexico, the US West Coast, Northeastern US, and Roatan. Brandon joined the crew of PIPE DREAM two years ago, bringing his mechanical expertise, attention to detail, outstanding work ethic and sparkling disposition.

On PIPE DREAM, Brandon's primary goal is to make sure charter guests have an experience they'll never forget. His professional goals include continuing his education and working on fun projects on boats. Outside of boating, he enjoys golfing, landscaping, and reading in his spare time.

Benjamin Rizzo was born in Chicago and lived a mile from Wrigleyville with his parents, two younger brothers, a cat, and a dog for his first 13 years. He started boating on Lake Michigan when he was very young, and his family later moved to a 46-foot catamaran that they learned to sail in the British Virgin Islands. As they sailed around the Caribbean, Benny tried everything from surfing to spearfishing until his family later settled in the ski town of Breckenridge, Colorado.

After working in restaurants during high school and after graduation, he began his career in the yachting industry.

He has cruised the West Indies from BVI to Grenada, the Bahamas, Miami-Fort Lauderdale, and New York. He began working on PIPE DREAM in 2022 as deckhand, and is the youngest member of their crew. Benny loves meeting people and visiting new places, and works to ensure charter guests have a safe and relaxing vacation.

While he adores the sun, sea, fishing and all water sports, his favorite place to visit is the snowy Colorado mountains, where he spends his time snowboarding and rock climbing. An adventurous spirit, he’s also been learning how to kite surf over the past few years and has even tried snow kiting.

Contact us for rates and current availability or to book a charter aboard Pipe Dream!

Disclaimer: While we make every effort to ensure that the information for Pipe Dream is current, we cannot guarantee that the details listed are 100% up to date. Please contact us and we will happily verify any details for you. Your privacy is important to us, view our Privacy Policy