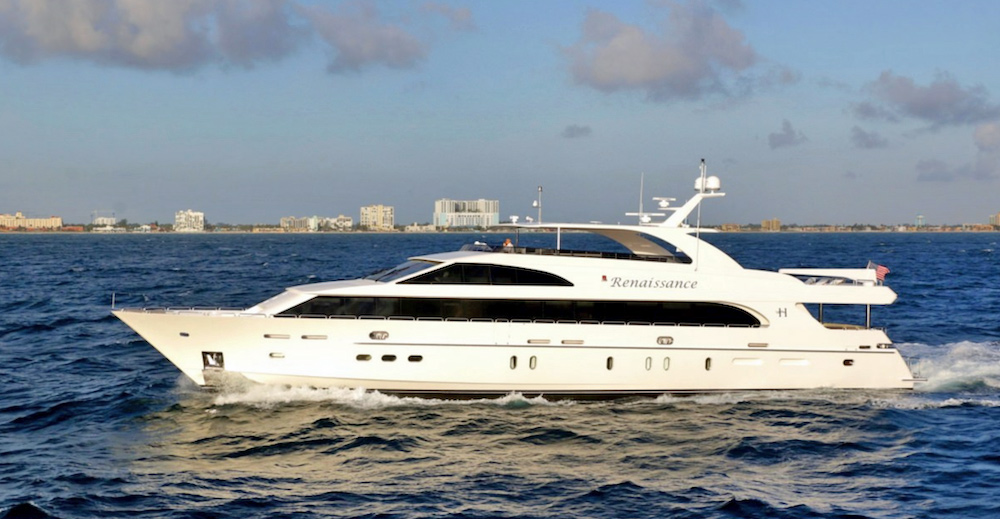 From $90,000 + expenses (2 passengers 7 nights)
To $90,000 + expenses (10 passengers 7 nights)*
*Price range is subject to change. Please Contact Us for pricing for various party sizes, number of nights and the premium weeks of Christmas & New Years. Best price guarantee: We endeavor to offer the lowest prices available and will always match lowest rates. We accept Visa, MasterCard and AMEX, no fees.

Renaissance was designed and custom built by owners and crew that have a long history of running a successful charter program which makes this the perfect charter yacht and why the have a 90% return rates with their customers. For privacy and high end service to fun times on the water this yacht was designed to only see the crew when you want or they will have already anticipated your needs.From personalized table settings for meals cooked by award winning chefs to sitting back an the aft deck enjoying your favorite drink watching drone and underwater sub of you friends or loved ones enjoying the water toys from the aft deck TV you are sure not to miss a second of your charter vacation. Her accommodations allow her to have five kings for couples or two convertible kings into twins for family. Her communications and AV systems are state of the art and continually updated to the newest standards. Her toy list is extensive including a 28’ Chris Craft launch tender to take you in style to your private beach for relaxing or setting up a beach clubs style meal. Missing a toy not on there list? They will meet your needs and have it onboard before you arrive.Operating in New England, Florida and in the Bahamas Renaissance is able to not only do term charters but can also offer all inclusive long weekend charters for those quick luxury getaways. Operating in Florida, the Bahamas and the East Coast of North America, Renaissance has five luxurious king-berth suites including an on-deck master and two lower king staterooms that convert to twin staterooms. MY RENAISSANCE is designed to pamper your family or guests in every way possible. She is superbly equipped with a wide array of toys & tenders and offers a charter of a lifetime.

Doug’s love affair with the sea started at an early age while spending summers on Jersey shore with his family. This led him to the U.S. Coast Guard where he spent his time in Miami conducting drug enforcement and Search and Rescue operations. After five years, Doug moved into the private yacht sector and ran as mate/engineer on a very well-known 114 ft. charter yacht operating in the Caribbean basin and western North Atlantic. At the age of 26 a chance meeting with the owner of a 106 ft. globetrotting yacht leads to Doug taking over as captain, and four years later he was back on the 114, this time as captain. Over the past 25 years, Doug has run some very popular charter with the latest one being the motor yacht Renaissance, Serving as build captain he oversaw all the little details that make her a perfect charter boat. We all have our favorites, and Doug says this one is his.

Christopher was immersed in the world of cooking from an early age, cooking at his father's popular cafe in Portland at the age of 13. From there he worked extensively in Seattle's restaurant scene, seeking out and training under some of the city's best chef's including Larkin Young and Thierry Rautureau. Chris also worked at the Thierry's award-winning restaurant, Loulay. Chris has been part of the Renaissance crew since September 2018. When Christopher isn't cooking, he is probably playing music with his friends or spending time with his family, either at his father's restaurant or on his mother's farmhouse...read more

Delaney has always found herself most at home when she was close to the ocean. From endless beach days as a kid at Alki Beach in Seattle Washington, to sunset surfing while in high school in San Diego California, to eventually competing for her Collegiate sailing team in San Francisco. During summers of college she took her love for the ocean aboard, working as a skipper in Greece and Croatia. Shortly after graduating from UC Berkeley in 2017, she joined the yachting industry. Over the years she has worked on yachts in the Mediterranean, the Caribbean, West and East Coast America and Central America. Delaney holds a U.S. Coast Guard license and is a certified sailing instructor. Delaney enjoys acyroyoga, hiking, snorkeling and all things active. She looks forward to making your stay onboard MY Renaissance comfortable, exciting and memorable!

Born in central Florida, Brooke was imprinted with the coastal atmosphere encompassing a small world of fishing, boating, surfing and water sports. After completing her Associates degree, she decided to make the big move to south Florida to pursue a career in the yachting industry. In 2015 she began her role as a stewardess, experiencing a whole new world of travel, foreign friends, and exclusive destinations. Over the last 4 years Brooke has enjoyed the yachting experience and takes pride in the hard work and dedication she has accomplished alongside her fellow crew mates. Aside from yachting, Brooke enjoys traveling, physical activities and sports, reading and gardening.

Tristan grew up on a farm in Williamstown, Massachusetts. After attending Coastal Carolina University, he decided to trade farm life for a life at sea. Starting as a jet ski guide, he later began driving center consoles until eventually moving on to join M/Y Renaissance. During his free time, he enjoys anything active and outdoors; dirt biking, fly fishing, hiking and climbing to name a few. He looks forward to sharing his love for fishing and the ocean with each M/Y Renaissance guest.

Samantha, who likes to be called Sam, was born in Okinawa Japan but was raised in San Diego California. Having several years of experience in the hospitality industry Sam decided to move in yachting and took the plunge in 2017. Growing up in a military family gave her a love for traveling and meeting new people, yachting was a perfect fit. In her off time, you will find Sam either hiking, at the beach, or on a paddle board.

Contact us for rates and current availability or to book a charter aboard Renaissance! 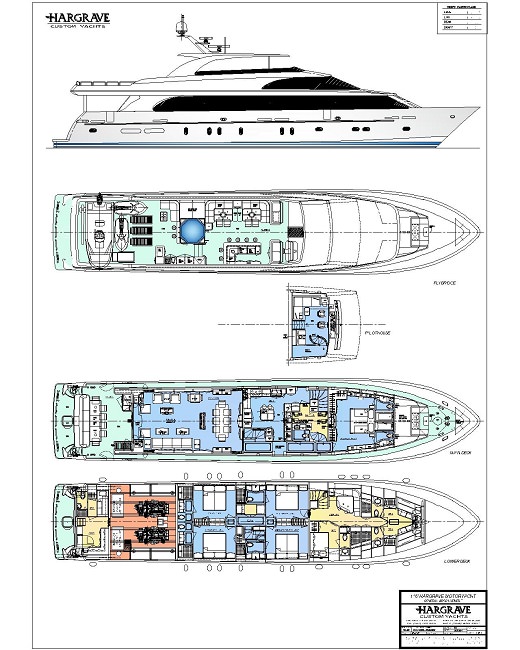 Disclaimer: While we make every effort to ensure that the information for Renaissance is current, we cannot guarantee that the details listed are 100% up to date. Please contact us and we will happily verify any details for you. Your privacy is important to us, view our Privacy Policy